The EU has the ambition of becoming a world leader in high performance computing (HPC). The EuroHPC coordinates the union’s efforts in the field and seeks to provide computing solutions, improve cooperation in advanced scientific research, boost industrial competitiveness and ensure European technological and digital autonomy. One of its missions is to support the procurement and deployment by 2021 in the EU of three pre-exascale and five petascale supercomputers. Luxembourg is hosting one of them. 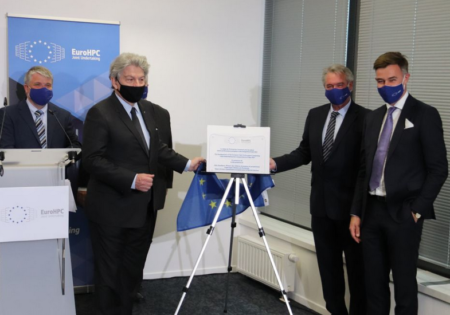 “I am particularly proud that the choice fell, quite naturally, on Luxembourg, heart of the European Union’s digital hub, to host the seat of the EuroHPC JU,” said Minister Asselborn. “In its double capacity as member and host state of the EuroHPC JU, Luxembourg will continue to support this promising initiative, which ensures the competitiveness of the EU in the development of the digital economy in Europe and to position Europe as a world leader in the field of high performance computing.”

The idea resulting in the European drive for high performance computing was originally born in Luxembourg. The country initiated cooperation with several other EU member states, and this eventually led to the implementation of the EuroHPC and its activities.

I am proud that it was under Luxembourg’s leadership that the EU put HPC on its strategic agenda.

“The EuroHPC initiative is a perfect example of how joint investments by the EU and the Member States can move Europe forward in different areas of advanced technology,” Minister Fayot pointed out. “I am proud that it was under Luxembourg’s leadership that the EU put HPC on its strategic agenda a few years ago as a key building block for the Digital Single Market and European Cloud initiatives.”

Luxembourg is home to one of the five petascale high performance computers that are being set up. The supercomputer, called MeluXina, has been designed primarily to meet business needs and will make 65% of its capacities available to start-ups, SMEs and large companies. The HPC will be operational shortly.